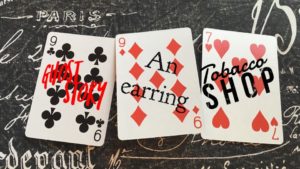 Every month on the first Monday of the month, ’Nathan posts a series of prompts for a flash fiction story due the following Monday. (Well, I say “due” but it’s not as if it’s a homework assignment; it’s completely no-pressure and I’ve saved up prompts and done them weeks or months later. Prompts never expire, and you can reuse them again and again. Just saying.) Anyway, he draws a card each for genre, item, and location. This month’s draw was a ghost story, involving an earring, set in a tobacconist shop. Now, I don’t smoke, and I’ve never seen a ghost, but I do wear earrings. Let’s just say I took… liberties with the prompt.

See, kids? “Write what you know” is bogus advice.

Anyway, I decided a play on words of a different title might do the trick and, well, here we go.

The Drag Queen with the Emerald Earring

The earring appeared out of thin air. Literally.

Jake was reading, and when he looked up to reach for his coffee, an emerald glint in the air caught his eye. The light streaming in through the cafe’s front window caught the facet of a large, green something that hung in the air momentarily and then plummeted to the floor with a tinkling sound. It lay just next to the pickup window where the counter staff set out customer orders. It was early, Sunday morning, he was one of maybe three other people in the cafe, and on a normal day someone else would have seen it or already trampled it.

Jake set down his book—The Swimming-Pool Library by Alan Hollinghurst; it made him feel somewhat scandalous to be reading a novel riddled with gay sex in the middle of a public place—and walked over to the trinket. It was an earring, clip-on style, heavy when he picked it up, and positively dripping with emeralds, a halo of tiny ones surrounding an obscenely large oval stone. The metal was silver, intricately carved into spirals and paisleys.

“Darling, oh you found it.”

He stepped back in alarm. A gloved hand had entered his field of vision. Again, literally. All he saw was an elbow length, velvet, veridian-colored glove, hovering at about chest height, the edge of it fuzzy toward the elbow.

Jake looked back at his coffee mug on the low table by his seat. What had they put in his latte?

He heard the sound of a throat clearing—”ahem”—and the voice spoke again. “Do you think I could have it back now, if you wouldn’t mind terribly?”

Jake had never hallucinated before. He’d never taken psychedelics, he’d had a good night’s sleep the night before, and—

Well. He placed the earring in the outstretched hand.

“Thank you so much.” The elbow bent, and the rest of the figure emerged as if stepping through a slit in the air. A woman, taller than Jake, in a green velvet dress to match the glove, a mass of red hair piled beneath a saucer-like hat festooned with a veritable jungle of flora. She clipped the earring to her right ear and then smiled at Jake, thin cracks appearing in the concealer around her eyes.

“I have no idea what I would have done if I’d lost this. Herbert would have been so—”

She cut off with a little hiccup, gloved hand flying to the shelf of her bosom. Whirling around, she took in the café. “Wh—what happened to the tobacconists?”

“The tobacconists.” She unhooked a parasol from the crook of her arm and waved it about her, nearly hitting Jake with it in the process. “I stopped in to get Herbert some tobacco for his pipe before—”

“This used to be a tobacco shop?” Jake asked.

“I don’t know, that’s what I’m asking.” Although, now that Jake thought of it, that did explain the rich, earthy smell of the place that even the perpetually running espresso machine never completely overpowered.

“I was in Fields’s Tobacconist not five seconds ago.” She looked around again, and something in her expression changed. She tilted her head upward, toward the light fixtures. She stared Jake up and down, leaving him feeling x-rayed. At the same time, there was something about her that seemed out of the ordinary to him, besides the fact that she was dressed for Halloween.

“Young man,” she said, her voice turning authoritarian, “what is today’s date?”

She waved the parasol again. “Yes yes, I know what day it is, but the year. Eighteen…?”

She gasped again, then clapped her hands together, her face lighting up. “Herbert, you genius. You did it!”

Jake tilted his head at her. “Are you a ghost?”

Her smile faltered and she raised an eyebrow at him. “Would a spirit have earrings the living could pick up?”

“No.” She touched a finger to her chin. “Although I suppose I am a bit of a ghost out of time, aren’t I? Now if only Herbert can do it all in reverse.”

She scrutinized the air now as if looking for something. She waved the tip of the parasol up and down, side to side, in what looked to Jake like a grid. He faced her profile, and at the edge of her jaw he thought he saw a subtle shadow…

She turned back to him, her parasol hovering midair. Again she raised an eyebrow. “Am I…?” She drew herself up to her full height and looked down at him. “Am I Miss Vida Greenleaf, headliner of the world-famous Greenleaf Girls Revue?” She extended her hand to him again. “The very same.”

Jake took her hand, sure that she wasn’t about to withdraw it until he kissed it. “And my darling fiancé Herbert has clearly perfected his temporal accelerator and sent me forward in time approximately—what year did you say it was?”

“One hundred fourteen years.” She returned her attention to the air. “And I’m hoping he has the presence of mind to keep the accelerator activated once he realizes his success. And my absence. I don’t suppose you would be so kind as to assist me, Mister…?”

She trailed off, an expectant look on her face. “Jake,” he said.

“Mister Jake. Do you happen to recall where precisely I entered this time?”

Jake turned toward the pickup counter. “It was right over there.”

Miss Vida turned toward the front windows. “That makes sense. I was following Mister Fields past the cigar cabinet to the humidors, which would have been right about there.” She approached, parasol outstretched like a weapon. “I tripped over one of the floorboards, and that must have been when I lost my earring, which you so kindly found for me.”

She gave him a quick smile and then returned her attention to scanning the air. Jake joined in the search, holding out his phone and looking for any telltale wobbles in the atmosphere. They kept at it for several minutes, but there was only so long they could peer at the same square of air. Miss Vida sighed.

“He must have turned off the accelerator. It does take a frightful amount of power. The first time Herbert turned it on, it nearly made the Union Electric plant explode. Mayor Wells was not happy, to say the least. Unfortunately, that put paid to Herbert’s dreams of having his invention featured in the Great Exhibition, but c’est la vie.”

“Young man, I have no idea.” Sighing, Miss Vida lowered herself into one of the plush wingback chairs tucked into the corner of the cafe near the fireplace. Once it got cold enough, in a few weeks, they’d start lighting fires during the day, and Jake always enjoyed that. Miss Vida looked like she could use the warmth of the fire right now. Her face had gone ashen, even with all the foundation and concealer. “I know this isn’t a tavern, but do they perhaps serve something here a bit sturdier than coffee?”

Jake went to the front counter and returned with her requested brandy. As he handed her the snifter, he said, “The girl at the counter said they don’t use the brandy a lot so it might not be all that fresh.”

“As long as it’s brandy.” As Jake sat down in the wingback opposite her, Miss Vida raised the glass to her lips and sipped delicately, then tossed it back. She grimaced before reaching for a napkin to blot her heavily rouged lips. “I will not say that I haven’t had better. But thank you, young man.”

She set the glass down on the table and folded her hands in her lap. They looked at each other across the table. Jake felt as if he should say something to this visitor out of time, something to make her feel welcome.

“I suppose you have a lot of questions,” he said, “about how things are now.”

“Young man, I cannot begin to imagine.” A look came over her face, as if she had just then made a decision. “But considering that it may be some time before Herbert realizes what has happened—”

She stood and held out her hand toward Jake.

“Perhaps you could show a lady the sights.”