I’m tempted to ask how we got to December so fast and how it took so long at the same time. To recap, for those just tuning in, the first Monday of every month this year, Cait Gordon has offered a writing prompt with three elements chosen based on a random draw of playing cards: a genre, a setting, and an item to be included in the story. For the last month of the year, the prompt is a dystopia, the setting is the Eiffel Tower, and the item is a cane.

As Cait said, it’s surprising it took this long to get to a dystopia. And, as always, I took a few liberties with the prompt (although this time I at least came close to the 1,000-word maximum word count). 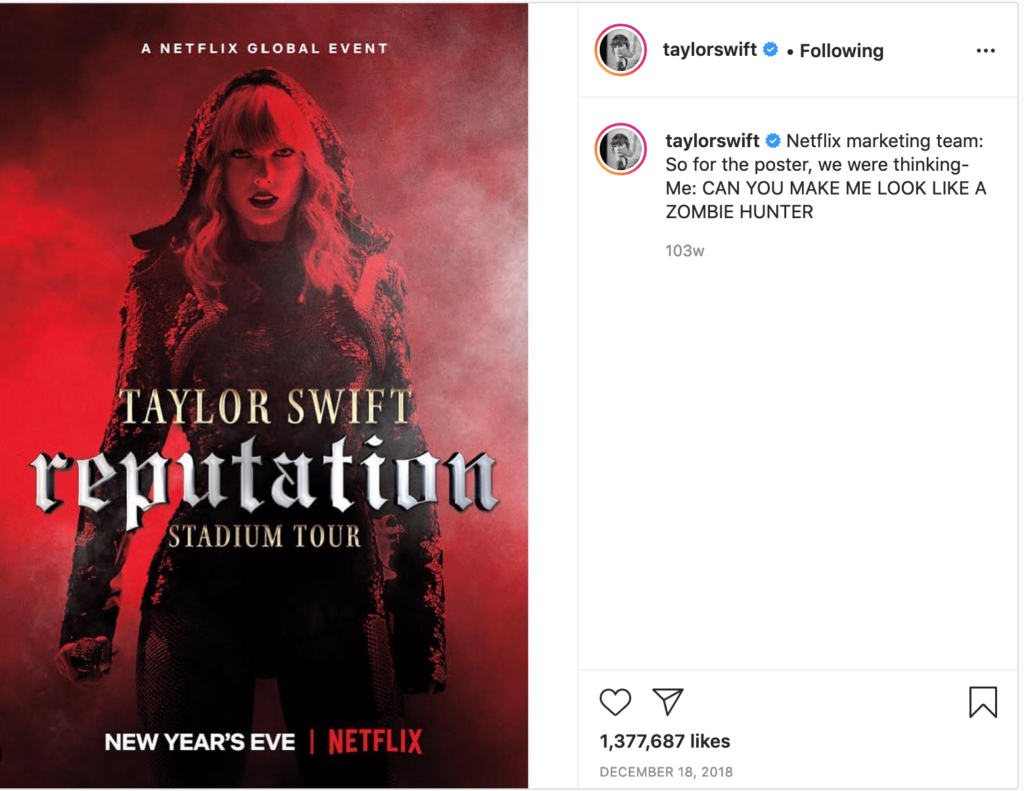 Have I mentioned I’m a massive Taylor Swift fan? In any case, I’ve wanted to write something inspired by that photo ever since I saw it—Taylor Swift, Zombie Hunter!—and now I have.

But first, a programming announcement: inspired by Cait’s prompts this year, and with permission from the originator of the Flash Fiction Draw, ’Nathan Burgoine (you might recognize his name from around these parts), they’re permitting me to carry the baton for next year’s Flash Fiction Draws. So, starting January 4, you’ll find a new writing prompt here from me, selected at random based on the luck of the draw.

I suppose I should figure out how to take a video of myself before January 4… not to mention how to enable comments.

Details, details, though. Anyway. Without further ado, and with apologies to Ms. Swift:

Taylor raced down the strip as fast as the heat and her spectacularly impractical boots would let her. They were meant for the stage, not running along sidewalks while a mob of brain dead, flesh-eating shufflers pursued her in relentless slow motion. Less worried about the ones behind her, she kept an eye on the cross streets ahead, hoping she’d have a straight shot down the strip to Tropicana Avenue and the airport.

She’d always kind of hated Las Vegas. The zombies were just one more reason to add to the pile.

As terrifying as the shufflers were, the thing that made her nearly scream was the Bellagio fountains suddenly coming to life and spewing geysers into the air next to her. She managed to stifle her outcry, which turned out to be fortunate: sparing a glance behind her, she saw the shufflers now mingling almost haphazardly in the middle of the road. The outburst from the fountains must have masked her footsteps. She started running again, the Eiffel Tower of the Paris hotel a blur on her left.

Taylor had figured out a few things about the shufflers: the first was that even though they were slow, they were strong. Stronger than the human beings they’d once been. The man outside her hotel who’d tried to fight one off hand to hand had proven that in especially gruesome fashion.

Second, and maybe more important, was that they were completely blind. What they lacked in vision, though, they made up for in keen hearing and an almost animal-like sense of smell. Even more of a reason for her to ditch the boots, but the pavement was too scorching for bare feet.

She had to do something, though, or she was going to break her neck or bring another horde of shufflers her way.

The street ahead was still deserted, although the pavement was littered with the grisly remnants of shuffler victims… one of whom had been wearing running shoes that looked close to her size.

It was gross. And appalling. But she had to do it.

I’m so sorry she repeated in her head as she slipped the red Brooks shoes off what remained of the woman’s corpse. Her wrinkled, spotted left hand still clutched the handle of her cane, its tip smeared with blood.

Sitting in the middle of the road to change her shoes seemed like madness, but what choice did she have? She set down her weapons and unzipped her boots. A little snug, once she had the laces tied, but still her feet breathed a sigh of relief. She picked up her crossbow and axe and set off at a jog.

She’d grabbed the axe from the “in case of emergency” cupboard on the floor of her hotel. Finding the crossbow in the circle drive of the hotel, along with a nearly full case of bolts, had been pure luck. Whom had it belonged to? And what had happened to them? She’d wondered these things only for a moment before she looped the straps over her shoulders and ran.

One thing she hadn’t been able to figure out was why her booking agent thought a show in Vegas was a good idea. What about my last two albums says ‘Vegas’ to you? she’d asked. Trust me, he’d said, and somehow they’d made the forest stage set look almost cozy in that massive arena. So she thought maybe she should apologize the next time she saw him… until she woke up the morning after the concert to find Las Vegas overrun by the walking dead.

Tree had left dozens of messages on her phone that morning. When Taylor finally reached her, Tree said the rest of the crew had gotten out the previous night with the equipment trailers, before things started quickly going bad. Get to the airport, Tree said. A helicopter’s coming to pick you up.

Between the draining heat and dodging random groups of shufflers—for some reason, they seemed to cluster together—it took her half an hour to reach the airport perimeter.

Which was, of course, fenced.

Fuck. She jogged along the fence line, hoping to find a way through or maybe under. No luck. Until she came to a service road blocked with a gate held in place by a heavy duty padlock.

CCTV cameras flanked the gate at the top of the fence; was anyone left alive in a control room somewhere to see her lift the axe over her head and bring the blade down on the lock once, twice, three times before it broke, the clang of metal against metal deafening in the silence. She shoved the gate open and ran up the road and onto the tarmac, pausing for a moment at the end of the runway. Now what?

Her phone buzzed in her pocket. She slid it out and put it to her ear.

“Taylor!” Tree’s voice was practically a shriek. “The helicopter’s on the way. Can you see it?”

Taylor spun in a slow circle, squinting into the bleached desert sky. No sign of the helicopter yet. But she did see a line of shufflers slouching through the open gate behind her. She started down the runway again.

“It’s not here yet,” she said, still keeping her voice low, “but I’m being chased by a group of those things. I’m at the end of the runway right now. Can you tell them to head this way?”

“I’ll try, but it’s getting harder to get through. I had to call you a dozen times at least before it finally connected.”

“Listen, if I don’t get through this, please tel Joe—”

“No.” Tree’s voice was like a buzz saw. “You are not going to talk like that because you are getting through this, do you understand me?”

Taylor sighed. It wasn’t even noon and already she was so exhausted. “Okay.”

That was when she heard the beating of helicopter blades in the distance.

It wasn’t until she was strapped into the seat next to the pilot—big fan of yours, he said, glad I could help—that she finally loosened her grip on the axe and let it slide into the footwell. They headed away from the city—from up here, it didn’t even look as if anything out of the ordinary had happened—and she wondered if there was a song anywhere in this.

She looked over at the man at the controls. A strong profile, mouth set in a grim line. Maybe a little younger than her dad. For the life of her, she couldn’t remember the name of the pilot. She’d have to make sure she found out. He’d saved her life, after all.