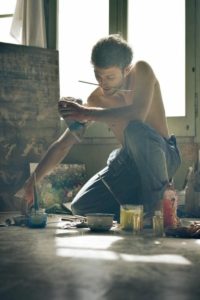 When ’Nathan posted this picture last week for his Friday Flash Fiction piece (which you should go read), it brought to mind something I wrote about four years ago. At least, I think it was four years. My memory is not what it was.

(Narrator: his memory was never good.)

I wrote a half-finished draft of a novel based on some conversations and some letters with a wonderful woman I met while in graduate school, a retired lady who had this antique desk with a secret drawer full of letters. She showed me the letters and let me make copies of them and said, “Maybe you can find a story in them.”

How often does someone just give you a story like that? Her generosity is still humbling to me. And makes me a little ashamed that I haven’t picked up that manuscript since 2016.

But that’s another story. There’s a scene in the manuscript about one of the main characters, Evan, whose mother has recently died (what is it with me and dying mothers? I have no idea) and who is trying to reconcile with his estranged sister. Evan’s a painter, but he works in an art supply store to get by and sucks at dating. A friend of his makes him sign up for a dating app and, well, here’s how one encounter ends.

“So,” Jason said after they were lying in Evan’s bed again, “what do people usually say when you tell them you’re a painter?”

“Sometimes they’ll ask if I paint houses or pictures, and my answer is usually it depends on how much they’re paying. Every once in a while I get someone who says ‘draw me like one of your French girls’ and I’ll know our taste in movies has no common ground.”

“It was okay, but my little sister was borderline obsessed when it came out, and that pretty much soured me on it.”

“What do people usually say when you tell them you’re a lawyer?”

“They ask me if I’m a do-gooder, save-the-world type or the sell-my-soul corporate type. Then I tell them I do contracts and estate planning and their eyes glaze over as if I’ve told them I was an accountant. Then I tell them I do community theater on the side and they’re really afraid I’m going to try to sell them tickets to the next show I’m in or something.”

“Was this all a ploy to try and sell me tickets to the next show you’re in?”

Jason rolled over and propped himself up on Evan’s chest. “What if I told you the next show I’m in is The Full Monty?”

“I’d say I’ve already seen that show, but it was good so I’d be willing to see it again.”

Jason smiled. “I hope you mean that for real.”

Evan did mean it. So why was he surprised that Jason was interested in seeing him again? He kept that surprise to himself—he was smart enough to at least recognize the dividing line between charming self-deprecation and awkward insecurity.

It was close to seven when Jason finally had to leave. (“Dinner with my mother,” he said. “Yes, I know that is probably the lamest thing someone could be doing on a Saturday night, but she’d kill me if I bailed on her—and yes, it did also cross my mind to try and bail on her and stay here, but I don’t want to wear out my welcome.”)

He sat on the edge of Evan’s bed and pulled on his shoes—he still hadn’t put on his shirt, and as he looked up toward the window again, the streetlight that usually kept Evan awake blinked on, sending a yellowish beam slanting across Jason’s face and the slope of his shoulders as he tied a shoelace. Evan, still naked, hopped off the bed.

He returned a moment later with his sketchbook and a hastily grabbed pencil. Jason grinned.

“Does this mean you want to draw me like one of your French girls?”

“Maybe. Hold still.” He quickly blocked in the composition and hoped he’d remember the particular arrangement of colors. He spent maybe five minutes on it, then closed the sketchbook.

“Are you kidding? No one’s ever wanted to draw me before.”

He kept working on the drawing long after Jason had left, working on shadows, highlights, the curve of Jason’s fingers as they gripped the shoelace matching the angle of his shoulder catching the light. It was beautiful, that shoulder, the swell of muscle narrowing to a teardrop where it met his bicep, the dusting of freckles there. Those didn’t make it into the drawing, fading to invsisibility in the streetlight, but Evan could see them clearly as if they were still beneath his fingertips.

It was nine o’clock before he set the sketchbook down again. His stomach grumbled. He hadn’t worked for an uninterrupted stretch as long as that in years.