I sometimes feel as if I’m cheating when it comes to ’Nathan’s monthly flash fiction draw. Instead of writing a self-contained piece of fiction, I often use these to work out a continuation of an earlier story. That’s the case for September, which follows up on this post. (Which was a follow-up to an earlier post, but I’ll let you follow the trail back to it.)

Anyway, cheating or not, it’s what I’m doing. 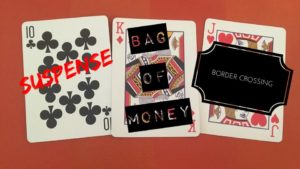 The challenge was to write a suspense involving a bag of money set at a border crossing. You can find out more about this month’s prompt on ’Nathan’s blog, and you can see all the other participants there as well.

So, without further ado:

Tella slaps a hand against the counter. “You think I do? Temple’s bells, I think this is the stupidest idea ever.”

Daniel hadn’t realized Tella and the diner are the hub of a smuggling ring between Earth and the rest of the Confederation. That is, not until he told her about the man he’d followed to the scrapyard, and the moment she’d been revealed as his mother.

“Your mother?” Tella makes the cross of the Seryan Temple then, which looks like tying an elaborate knot. “He—she—told me he was an Ambaran trader from the Belt when he made the pickup.”

“I guess she lied,” Daniel says. “Where’s she headed?”

Tella hesitates, exchanging a glance with Hermione that makes him wonder how much his co-worker knows. “Uzari Prime with a load of N57 blasters hidden in a shipment of dicarium ore.”

“Uzari?” Hermione sounds either dumbfounded or horrified, Daniel can’t tell which yet. “Are you kidding me? You’re smuggling arms to the insurgents?”

Tella grabs Hermione’s arm, hard, and hisses, “For the love of the Nine Muses, keep your voice down. Are you trying to get me arrested?” The women’s eyes dart around the sparsely populated diner, but no one seems to have heard them. “The Uzari insurgency is what keeps a roof over our heads, and the roof over our heads keeps Central Security off my back. And—” Tella raises a hand “—before you start lecturing me with whatever righteous indignation you’re about to spout off, no one else is implicated in this but me and Chef, and I cover my tracks. So keep it to yourself.”

Before Hermione can fly off the handle, Daniel asks, soft enough not to be overheard, “Why is my mother smuggling for the Uzari?”

“Not that I know of.” Daniel frowns. “The only relatives I know of were from Earth or Mars, as far as I know.”

“As far as you know,” Tella repeats.

Hermione crosses her arms. “Are you sure there isn’t a better way to get him through security?”

She doesn’t, which is how Daniel ends up in line at the spaceport with a new passport, a round-trip ticket to Mars, and a backpack with over one million creds sewn into the lining. Uzari rebels can only deal in hard currency because even the slightest risk that any bank transactions could lead right back to them is too big, which means Tella arranges transportation for people like Daniel all the time. And she feeds them a free meal to boot.

The round-trip part of the ticket was Tella’s idea. “In case you find her and it doesn’t go the way you’re planning,” she said.

Daniel wipes his palms against his trousers and wonders if he should just turn around and head back to the diner. The line to get through passport control is crawling. The flight to Luna Central Station is eight hours, and then he has a twelve-hour layover until the transport leaves for Mars, which is a two-day journey. There are faster ways to get there, but a microwarp shuttle is less likely to draw attention—and was all Tella was able to pay for, anyway.

And then, unexpectedly, the line speeds up, but not for good reasons. A group of ten passengers is led away, loudly, by a group of security guards holding their stun batons a little too tightly for Daniel’s peace of mind. Only five people in front of him now.

At the control gate, passengers split off to four different passport agents stationed at high desks behind glass partitions. One of the agents turns off their light and leaves their desk; maybe going on break, Daniel figures. A groan travels along the line behind him. One less agent means their wait will be just that much longer.

“Next.” Suddenly, Daniel’s at the front of the line. He walks up to an agent’s desk and slides his passport through the drawer.

“Hi,” Daniel says, his voice squeaking. He clears his throat. The agent, a human male, doesn’t look up as he plugs in Daniel’s passport and scans the readout.

“Destination?” he asks, though the information is loaded in Daniel’s boarding pass.

I’m looking for my mother so I can find out why she abandoned me, he doesn’t say. “Study.”

The man looks up, and Daniel thinks he’s glancing at the straps of his backpack. “Two weeks and that’s all you packed?”

Daniel feels as if every pore on his face has suddenly turned into a gushing faucet. “They told me to pack light and the school would have stuff for me when I got there.”

The agent shrugs, presses a button, and slides Daniel’s passport back in the drawer. “Have fun, kid.”

Daniel waits until he’s well past the checkpoint to breathe a sigh of relief. He finds the departure lounge for the skimmer that will ferry him up to the shuttle in orbit and slides into a seat. He’s still got a couple hours before it leaves, and all he wants to do is sit someplace and not move, not stress, not even think now that the worst is behind him.

Which is probably a thought he shouldn’t have, he thinks, when the agent from the gate sits down next to him half an hour later.

“So what’s your story, really?” he asks, then leans closer. “And what’s with the bag?”