They (that ambiguous, omnipresent “they”) always say that you learn more from your failures than you do from your successes. Unfortunately, it’s true. Equally unfortunate for me, I just got reminded of that recently.

I’ve been talking a lot about the as-yet-unnamed sequel to The Unwanted over the past three years. Recently, I came to a decision: I’m shelving it. Or rather, putting it in the drawer. Well, even that’s a metaphor. It consists mainly of a collection of files on my hard drive that I’m going to drag into a folder labeled “Abandoned.”

No, really, I have a folder labeled “Abandoned.” See? 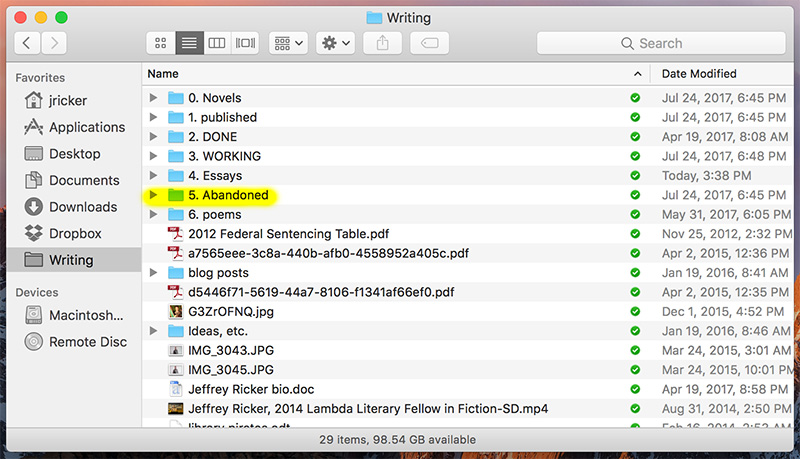 There’s tons of stuff in there. TONS, I tell you.

Here’s the thing, though. I feel pretty good about this decision. I wish I’d come to it sooner, as I’ve gone back and forth on it several times in the last few months. In the process of making the decision, though, I realized a few things:

Don’t go back to the same dry well.

The Unwanted got some nice reviews, including a really positive one at the American Library Association’s GLBT Reviews website. I’m really proud of that one. But the book didn’t really find a significant audience, certainly not in the way that would justify going back and revisiting these characters (and working out just how to get some of them back on the stage for a sequel). There’s also the risk—and this alone is not a reason not to write a sequel—that what happens to them in a follow-up novel could alienate readers who were perfectly happy to let the story end where it did.

I’m not gonna lie. I think I knocked it out of the park with that book. If it ends there, I’m happy.

Like I said, I’ve been working on the sequel for well over three years. You might think after that long, I’d be in the frame of mind to just get behind this thing and shove it across the finish line. But that would mean at least a few more months before I had a draft I felt comfortable turning in, and then another several months with all the requisite edits, proofreads, and so on before it even came out. Of course, the job doesn’t end with publication day, either. There’s promotion and readings and everything that goes into getting a book noticed and in people’s hands.

This is not me complaining. I love doing that stuff. And this isn’t me complaining about The Unwanted not being the success I’d hoped it would be. This is me working out tough choices about where to focus my limited time and resources for the good of my writing practice.

Don’t wait to start on the next thing.

I might feel bad about the decision to shelve something I’d worked on for three years if I hadn’t already started four more novels in the meantime. One of them is in revision, another is a very rough, incomplete draft waiting for me to sift through it, the third is a forty-five page story that I wrote in grad school that doesn’t want to be a short story, and the fourth is an idea that’s just starting to take shape in a composition notebook. If I find myself wondering “what now?” I know I’ve got options.

Don’t draw your self-worth too much from any one project.

Or any one part of your life. In addition to my aforementioned facility with ardha chandrasana, I’m a pretty good cook and a more than passable bread baker. I’m also not half bad at Scrabble and, according to a former boss, I have an unusually good recall of the Associated Press Stylebook. When a writing project is giving me fits, I know that I can go into the kitchen and bake a cake and make buttercream frosting with my eyes basically closed, and I can get a batch of homemade pickles started, no problem. I may not be able to string two sentences together at times, but at least I won’t starve. Also, I can hold plank for two and a half minutes, which helps counteract the cake.

Don’t throw away anything.

I could just as easily have dragged all those files to the trash folder and clicked “empty trash.” But I didn’t. Even though the novel won’t ever see the light of day in its current form, there’s something in it that kept drawing me back… and I don’t think it had anything to do with Jamie and Billy. There’s a story within it that’s not the one that I was trying to tell, but it’s one that I might want to try telling later.

This year has pretty much been about embracing rejection. And I would say that embracing failure is a companion on the journey, and maybe the more important one. Do the things that seem impossible. Write the stories when you don’t know how they’ll end. Fail bigger. Fail often. Try again. Eventually succeed.

What I don’t regret is spending more time with these characters, even if it was just them and me. I’m still very fond of Jamie, Billy and Sarah. I don’t think that’ll ever change. I hope it never does.