As I’ve mentioned before, I’m in a Facebook group called Friday Flash Fics. We’re given a photo as a writing prompt, with our flash fiction responses (500 words or less) to the photo posted every Friday. And also again I’m late and over the word count. What was this week’s photo prompt, you ask? Well, it’s Santa themed, sort of, but I think I’ll just let the picture speak for itself: 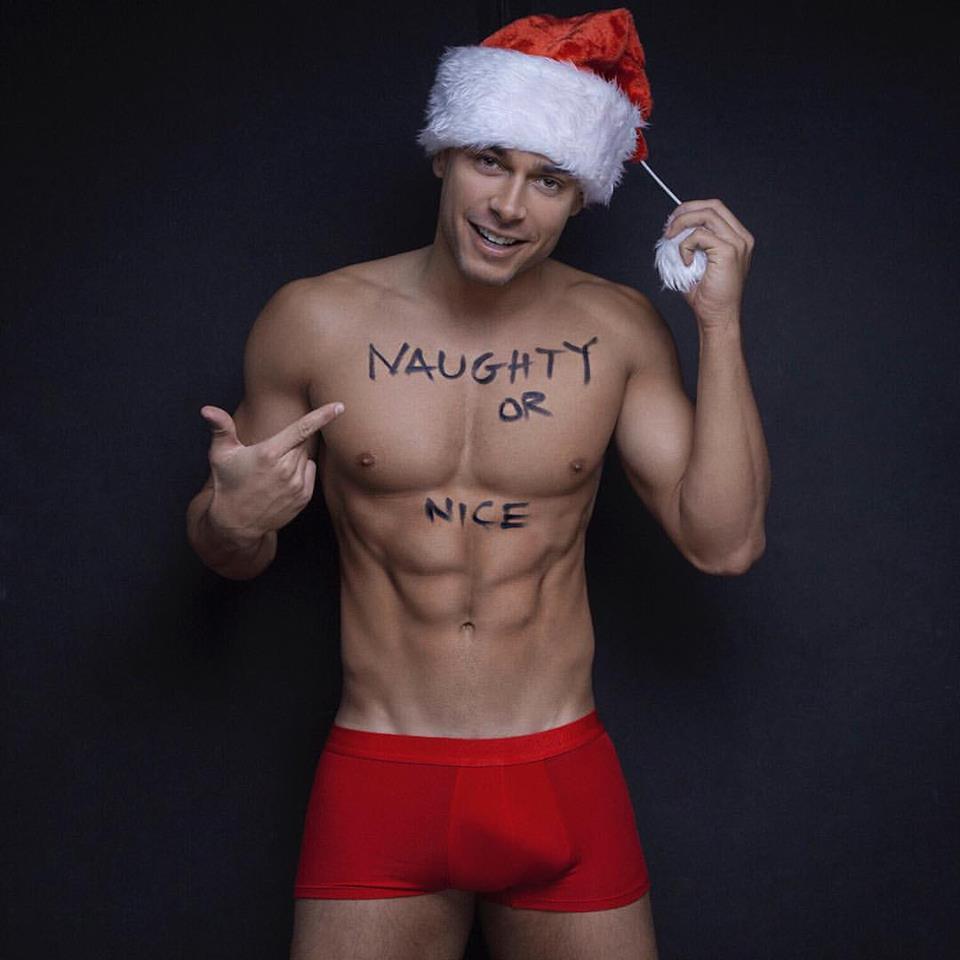 I briefly considered putting a black bar over a portion of the picture to keep this family friendly, but where’s the fun in that. Anyway, without further ado…

At first Blake thought he might still be asleep when he turned from the coffeemaker and saw the man standing in the kitchen doorway. Someone had written “Naughty or Nice” across his chest. He wore a Santa hat and red boxer briefs, and judging from the way the briefs fit, the man was having a good morning.

Blake was not having a good morning. It was Christmas Eve, he had worked an evening shift on the copy desk last night, and he had to go in again this evening. And tomorrow, well… it wasn’t like he had any plans. His family had seen to that years ago.

His coffee-deprived brain kicked into gear, and he started to put the pieces together: His roommate, Kate, who was still probably asleep; this man, who must have been one of her rotating cast of characters. She was more of a horndog than most other gay men he knew.

This might have been why they got along so well.

“Sorry,” the man said, holding a hand in front of his shorts. His voice was annoyingly chipper for—Blake glanced at the oven clock—six forty-five. Fuck. “Morning. You know. I didn’t think anyone else was awake.”

“Uh huh.” Blake was barely verbal in the morning, to say nothing of before coffee. He held up a finger, turned around, and lifted the carafe from the coffeemaker and poured a cup. He didn’t turn back around before taking a long, greedy sip and burning his tongue. Not that he cared. Some things, like caffeine, were worth minor pain.

When Blake turned around, the man’s eyes flicked up to Blake’s face quickly. Was he just staring at my ass?

“Thanks.” Blake stepped aside as the man walked over to the counter and helped himself. “Do you have any cream or sugar?”

Blake’s brain was getting up to speed, so he almost said the first thing that came to mind. Instead, he pointed at the sugar bowl on the other side of the stove and said, “Milk in the fridge.”

“Oh, sorry.” The man shut the fridge and, turning toward Blake, held out his hand. Blake kept his eyes from flicking down the man’s body (but tried not to look like he was not looking). “Adam. Kate didn’t mention me?”

That made the man laugh, the tassel on his hat bobbing over his shoulder. “No, I’m her little brother.”

“Not so—” Blake shut his mouth, then tried again. “I can’t see the resemblance, to be honest.”

Adam smiled, and then Blake could see it: the squaring of the chin, the half moon of teeth… he and Kate actually did look a little bit alike…

Except for obvious things. Blake lifted his coffee mug to his face and hoped it concealed enough of the forest-fire blush he felt raging across his cheeks.

“So, why are you dressed up all….” Blake waved a hand toward Adam’s—well, everything—and Adam rolled his eyes.

“Oh, this. You know Derek and Malcolm?” Blake nodded. They were Kate’s other gay friends, although Blake didn’t really travel in their circle, which was at least one tax bracket higher than his own. “They had their bachelor party last night and I was… the entertainment.”

Adam was plummeting in Blake’s estimation by the second. “You’re not serious.”

Adam shrugged. “It’s gonna cover my car payment for the next three months.”

“Will it cover your dignity too?”

“Dignity doesn’t pay the bills.” Again, Adam shrugged. “Besides, this is the nakedest I got all night.”

Blake smirked. “It’s good to know you have standards. Speaking of those, let me guess what you danced to…. ‘Santa Baby’?”

“Guilty as charged.” Adam leaned back against the counter and cradled his mug in both hands. It wasn’t lost on Blake how that posture made certain things stand out even more.

“Sounds like a fun night,” Blake said. Which was a total lie. It sounded ghastly.

To his surprise, Adam shook his head. “Not really my scene. If it weren’t for my sister and making bank, I’da skipped it.”

Something about what Adam was telling him needled at Blake. If Adam hadn’t kept fiddling with the tassel at the end of his hat, he might not have figured it out. “So, did you sleep in that hat?”

“This? Nah, I just figured I’d put it on to cover up my terminal case of bed head.”

“I thought you said you didn’t think anyone would be awake.” Blake narrowed his eyes. “So why bother? Besides, I highly doubt that Kate would care one way or the other.”

Adam looked as if he was on the verge of answering Blake’s question, but his shoulders sagged and he lowered his mug. “Clearly I should have planned my cover story a little better.”

“Covering things up doesn’t seem to be your strong suit.”

“Ha. When she was trying to talk me into this shit show,” he gestured at the hat, the words scrawled on his body, the shorts, “Kate showed me your Facebook profile and said I should meet you.”

“Because you’re totally my type?” Adam grinned sheepishly and fiddled with that damn tassel again. “So, um, hi?”

“Hi.” For a long moment neither spoke, choosing instead to stare into their coffee mugs. “Well, this is awkward,” Blake finally said.

“You’re probably seeing someone, is that Blake shook his head. “No, it’s just… usually it takes me slightly longer before I get to see what a guy looks like in his underwear.”

“Well, at least we got that out of the way early,” Adam said. “That is, early if there’s going to be a later.”

Blake considered for all of five seconds before asking himself what the hell there was to consider. “I have to work today, but not until this evening, if you’d like to go out for coffee or something.”

“I basically run on coffee.”

“Good to know.” Adam set his mug down and stepped a little closer to Blake. “I guess I should probably get dressed if we’re going out for or something.”

This time, Blake didn’t even try to pretend he wasn’t looking. He let his gaze travel down the length of Adam’s body. When he looked Adam in the eye, it didn’t seem as if he minded being admired. “Well, not on my account, but it is December and it’s kind of cold outside. And most places that serve or something do require shirts and shoes.”