This week’s Friday Flash Fics photo prompt reminded me of Philip and Joel from Detours: 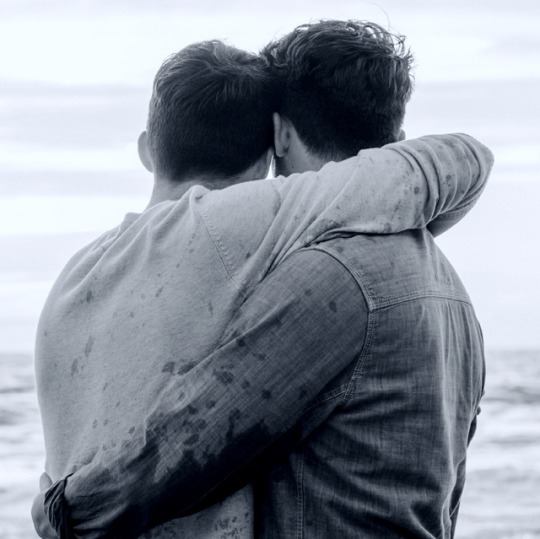 Nice, yeah? It made me wonder what happened after Joel moved to England so he and Philip could be together. Let’s find out, shall we?

Philip wakes up alone, again. The third time in a week. The first night, panicked, he’d called out, stalked through the cottage with frantic steps, nearly tripping over Jasper, who was used to having reign over the house in the dark. Now, though, Philip knows where he’ll find Joel.

There’s dim, not-quite-morning light filtering in through the staircase window as he descends and slips into his boots before quietly opening the front door. Although why he bothers to keep quiet, he doesn’t know. There’s no one else in the cottage, and the ever-present murmur of the ocean conceals most small noises.

The last two times, Joel came out and stood at the end of the yard, leaning against the fence as he stared toward the water, which you couldn’t really see at this distance, although the flattening out of the sky hinted at its looming presence. This morning, Philip finds the yard empty and the gate unlatched. He pushes it open on creaking hinges and follows the rut through the seagrass.

It’s an easy ten-minute walk from the cottage to the sea. Philip could text ahead and let Joel know to expect him, only Philip’s phone is still sitting on the kitchen counter. He wasn’t expecting to go past the yard, but he doesn’t feel like backtracking to the house, either.

The cottage in Cornwall had been Joel’s idea, a place to get away when the city felt like it was closing in on them. A bit ramshackle and outrageously priced for the condition it’s in, but the lack of neighbors and the short walk to the ocean more than makes up for those shortcomings. They spend as much time there in the summer as they can, whenever Philip can pry Joel away from the bakery long enough. (Five years later, he’s still reluctant to leave Sylvia to run things for a week. Philip reminds him that she’s co-owner, not his staff, and perfectly capable. Joel invariably replies that her scones are still not on a par with his own. Philip, diplomatically, does not point out what an arrogant thing this is for an American to say.)

It’s mid-autumn now. Philip suggested they come out after the call from the nursing home thousands of kilometers away in Portland. In practically the same breath, Joel learned his father was fading and also that his father didn’t want him to drop everything and rush to be at his bedside: “Live your life, son. Nothing you could do here anyway except sit around and worry, and that’s fucking boring.” After two days of watching Joel pace the flat and contort himself like the pretzels he baked most Fridays, Philip suggested a brief holiday.

Although they always talk about going down to the sea, the land actually rises along a gentle slope for most of the way from the cottage. The closer Philip gets, the more the sound of the waves and the surf grows to a throaty roar. The ocean’s restless today.

As the sky gets lighter, Philip sees first the top of Joel’s head, then the slope of his shoulders, the wind whipping his hair to the right. For a moment, Philip thinks he sees someone standing next to Joel—there’s a flutter of what looks like translucent, golden-colored fabric billowing around a slender figure—but when Philip blinks it’s just Joel, shoulders hunched and hands shoved in pockets, staring out to sea.

There are times when Philip finds himself, inexplicably, missing Joel, even though he’s standing right in front of him or lying next to him in bed. He can’t explain it, but part of Joel is always someplace else. When the ache settles into him, like an old wound, Philip is almost tempted to nudge Joel awake and ask him where that someplace else is, and why here isn’t enough. But he doesn’t ask the question, because he knows Joel doesn’t have the answer any more than Philip does.

By the time Philip reaches his husband’s side, the ocean is practically bellowing. A wave dashes against the rocks below, sending spray up to spatter their shirts. Shivering, Philip slips an arm around Joel’s waist. Joel turns, tilting his head until their temples rest against each other. He holds Philip a little tighter than usual, and tentatively, Philip puts his other arm around Joel’s belly, but is careful not to hold on too tightly, to let his embrace be gentle, loose.

There are things Philip would tell Joel if he could find the right words: that his father is getting the best care possible, that home isn’t a particular place so much as it’s the place where he and Joel both are, together. That there’s no need to go anywhere, because Joel’s already home. Instead, he stares out to sea as well and hopes the words will come to him eventually, or that they’ll never be necessary.