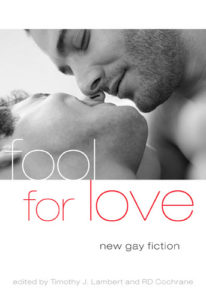 You never forget your first, right? This story was the first one I ever published. It still holds a special place in my heart, but when I looked at it now, it struck me that I didn’t realize at the time how long it was. Over 8,000 words? Seems excessive to me now. I’m a more concise writer, I think.

This story originally appeared in the anthology Fool for Love: New Gay Fiction edited by R.D. Cochrane and Timothy J. Lambert and published by Cleis Press. A lot of the authors in here have become friends of mine, as have the editors.

This story may have established a pattern for a lot of my future stories, in that they too revolve around love and somehow manage to work dogs into the equation.

At the End of the Leash

Brian had a soft spot for the big dogs. It seemed the larger the breed, the gentler the demeanor. Some of his favorite clients were Great Danes with their regal profiles, mastiffs with their sturdy dependability, Newfoundlands with their gentle stoicism. Every so often he would walk a dachshund or a Pekingese who would prove to be an exception to the rule, but in general, the bigger the better.

Casey, one of his favorites, was kind of in between. Not huge, but not small. Brian had been walking Casey, a weimaraner, for three weeks, every Monday through Wednesday at 3 pm, long enough for him to steal a bit of Brian’s heart. With his ice gray eyes and smooth sage coat, he had an otherworldly look that made people stop and take notice. Then he’d lick your face, and break the spell.

Brian had never met Casey’s owner. The agency had supplied Brian with a key to the tenth-floor apartment overlooking the park and instructions to feed Casey and take him for a brisk walk, at least half an hour, Monday through Wednesday. His owner commuted to Chicago three days a week, and the housekeeper took Casey out briefly in the morning, while a friend in the building took him out before bedtime. That left just the afternoon, which Brian covered.

Although Brian had never met Casey’s owner—C. Jacobs, according to the agency—there were photos on the console table in the front hall, next to Casey’s leash. Vacation snapshots mostly, they showed a dark-haired man who apparently liked sunny places and sunny blonds. There were photos of beaches, waterfalls, and a couple of cruise ships. In most of them the dark-haired man stood next to a blond man, who sometimes had his arm slung over the dark-haired man’s shoulders. Brian assumed the dark-haired man was C. Jacobs since he was in most of the pictures, and perhaps because of a little wishful thinking. In one, C. Jacobs was shirtless and wearing a Speedo. Brian knelt by the table to get a better look—picking up the framed picture would have been a violation of the service’s rules—and noted that, even though he didn’t particularly care for Speedos, C. Jacobs had the sort of body that could get away with wearing one.

Suddenly, Brian found himself knocked to the floor with a lapful of Casey. The dog must have taken Brian’s kneeling on the floor as an open invitation to play and had leaped on him, bumping the table and sending the pictures scattering.

“Shit,” he muttered, and quickly began gathering up the photos, then wondered if he should leave them where they lay and let Casey take the blame. It was mostly his fault, anyway. For his part, Casey sat at a distance, looking cowed and waiting patiently while Brian rearranged the pictures. Since he had to touch them anyway, he took a closer look at the Speedo picture—the man really was gorgeous. The blond man was undeniably handsome too, but—whether Brian was imagining it or not—had a fake look about him. His tan, his hair color, his smile seemed fake.

And his chest was obviously shaved.

Eventually, Brian returned the photo to the table. Casey wagged his tail when Brian looked his way. How long had he been lost in that photo? He really needed to start dating again, or at least forget about the last failed attempt.

Of course, there were a lot of those to forget—and none of them lately. The last ten months had been a drought of unprecedented duration for him. The time of year reminded him of it. It was the end of February, the Christmas holidays seemed so long ago that he couldn’t even remember what he’d been given, and there were no other holidays to color the gray monotony until Easter. There was nothing to do but duck his head, hunch his shoulders, and look forward to sunlight again.

He treated his dating drought similarly. He wasn’t really doing anything about it, so much as waiting for the cloud cover to lift.

The weather outside matched his mood. It was chilly and overcast, but the clouds held no promise of rain. Casey, oblivious to the weather, led Brian down the sidewalk.

Want to read the rest of it? You’ll have to sign up for my newsletter, which is easy. Just click here.