So last Friday my friend ’Nathan posted a flash fic piece in response to the photo below. I thought it was adorable, both his story and the photo. See for yourself: 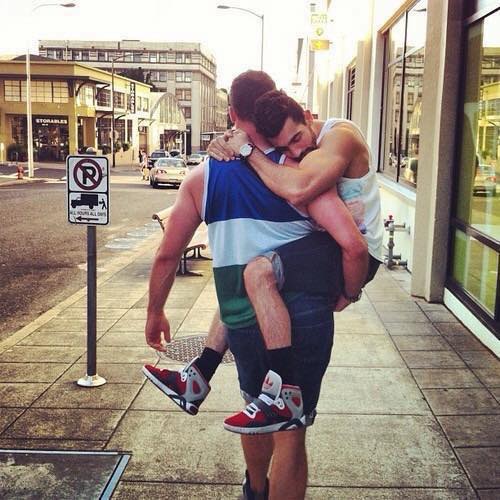 And I figured I’d see if I could come up with something by today to post, and what do you know, I did. It’s rough, but I hope you enjoy it just the same.

At first, Doyle didn’t recognize the man carrying him down the street, but somewhere between the thoughts oh crap am I being kidnapped and how did I get here was the realization that the guy carrying him was built like a tank. A really hot tank.

Doyle’s right arm flopped from around the man’s neck and he couldn’t seem to muster the strength to raise it again. Without breaking stride, the man (who was he?) lifted Doyle’s arm and draped it over his shoulder. That’s when Doyle noticed the band taped around his own wrist, the kind they give you when you’re in the hospital.

When he tried to talk, Doyle’s tongue refused to cooperate and all that came out was a raspy “unnh.” The man shushed him.

“Don’t try to talk. They said it might be tricky for a while.”

“Happened? You passed out at the rehearsal dinner. That was yesterday. Do you remember any of that?”

Rehearsal dinner? Rehearsal for what? A random synapse fired off the word wedding somewhere in a random corner of Doyle’s brain, but then fizzled before it could connect with anything else that might have been helpful.

“Who—” Doyle had intended to ask who the man was, but he picked up the thread and ran in a different direction with it.

“Is getting married? Wow, you really are out of it. They said the painkillers would make you a little woozy, but… Anyway, Dana. Your sister. You remember her, right?”

“Dana.” Another synapse fired, then another, followed by a flood of connections. The wedding. The flight to Chicago and the nearly missed connection. The downtown hotel where he was staying that was more opulent than any other place he’d stayed or lived. The endless stream of new faces from the groom’s side of the family…

And that was where his synaptic train of thought ran out of steam. The man carrying him must have been among that endless stream of faces, but Doyle couldn’t fish it out.

“Your sister’s fiancé. And I’ll try not to take it personally that you don’t remember me.”

Doyle darted his tongue around his mouth, searching for one spot that wasn’t dry as sand. Taking a deep breath, he managed to get out, “Think I’d remember you,” before the raw feeling of his throat got to be too much.

“Yeah.” He paused. “Especially after the kiss.”

Doyle flinched so fast, and so hard, it was almost painful. And it almost made Connor drop him. As it was, he had to set Doyle down to avoid dumping him on the sidewalk. Doyle’s knees buckled almost at once, but Connor steered him over to a bus stop bench and they sat.

“It was more the other way around, really.”

“I kissed you?” The instant it was out of his mouth, Doyle wanted to reel the words back in. Connor frowned. “No, I mean, you’re just way out of my league.”

“Okay.” There was a weight behind Connor’s statement that made Doyle think it wasn’t just a compliment meant to reassure him, but Doyle’s head was in such a fog that he couldn’t muster the focus to chase it down. Besides which, something else had pushed through the fog to claim his attention.

Connor ticked off the reasons on his fingers. “Exhaustion, combined with severe dehydration and low blood pressure, and standing up way too quickly after giving me what was possibly the best kiss of my life. Which reminds me.” From the pocket of his cargo shorts he pulled out a small plastic bottle of water and handed it to Doyle. “Have some of this.”

It wasn’t until Doyle took the first gulp that he realized how thirsty he was. He pulled at it greedily until Connor gently tilted the bottle down.

Doyle wiped his lips. He needed to get his head on straight. He would have shaken it, tried to dislodge the cobwebs, but he had a feeling that would only lead to a pounding headache. “So, um, where are we going?”

“My place.” Doyle could only imagine the deer-in-headlights look on his own face, because Connor held up his hands and said, “Whoa, not like that. Your suit is there. I’m the one who lives closest to the hospital. We have about,” he checked his watch, “two hours before we need to be at the banquet hall. If you feel up for it.”

Doyle braced his hands against the bench seat. Did he feel up for it? He thought so. Besides, he had only one sister, and hopefully, Dana was only going to get married once.

“Only one way to find out,” he said to Connor, who helped him get to his feet. After making sure of his balance and his footing, they started down the sidewalk again, Connor’s arm draped across Doyle’s shoulders, holding him close.

“So far so good?” Connor asked once they reached the end of the block.

“Yeah.” He paused. The light was red. “You know, there’s one thing I feel bad about.”

“I missed our first kiss. I mean, assuming there will be more? Not that there have to be more if you don’t want to. I mean, I know we barely know each other, but it’s not every man who will carry you down the sidewalk.”

Connor stared at the crosswalk signal a moment longer before turning to Doyle. “Just to make sure, you’re fully conscious and coherent right now, right?”

“In that case,” Connor said, cupping Doyle’s face in his hands, “let me fill you in on what you missed.”