Oh, this one was so much fun to write. I love writing bad guys as much as actors love playing villains, I think. I mean, admit it: Who do you think had more fun playing their character on Dynasty, Linda Evans or Joan Collins? Exactly. So, gay supervillains? Bonus!

The best part of this, though, was probably the editing process. Tom Cardamone really had great feedback that helped me improve the story and make it darker and “a little more Arkham,” as he put it. After I finished this, I considered revisiting the characters later, maybe a reunion of sorts between Marcus and the good doctor.

I’m still wondering who would come out on top in that confrontation…. 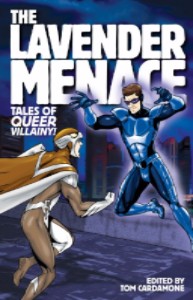 Marcus Harris had never seen the woman standing in the visitor’s vestibule adjacent to his cell, but her white coat, worn over a charcoal business suit, blared “psychologist.” She wore glasses and kept her curly blonde hair shoulder length. Sitting in the plastic chair reserved for visitors (who never came), she crossed her legs and settled a clipboard over her knees. When she smiled at him, it was completely unconvincing.

“I’m Dr. Emily Wheeling,” she said. “The warden asked me to come see you this morning and ask you a few questions.”

“Oh, is it morning?” Marcus asked, sarcasm edging into his voice. “It’s so hard to tell in here since I don’t have ready access to a clock. Or sunlight. Where’s Dr. Mathis?”

Dr. Wheeling looked down at her clipboard. “He had an unfortunate encounter with a homemade knife in one of the other wings, but I’m told he’ll make a nearly complete recovery.”

“That’s a pity. So why does the warden want you to speak with me?” Marcus asked, even though he knew the answer.

Dr. Wheeling tilted her head so she was looking over her glasses. “I think we can both say we know why, so let’s not start off like that, shall we?”

Marcus smiled. He liked her directness. “Please convey my apologies about his badge.”

“He was a bit more displeased with the second-degree burns to his chest.”

“I know he was attached to that badge, though.”

“Well, fortunately the surgeons were able to remove it successfully.”

Marcus said nothing in response. She was tapping her pen against the clipboard, whether out of nervousness or boredom, he couldn’t be sure. It was a felt-tip pen, of course. They were taking no chances with him now, it seemed. It also seemed like she wasn’t going to speak again unless he did first. He held out as long as he could stand the silence, which wasn’t long.

“So,” Marcus said, painfully aware that she had succeeded in waiting him out, “aren’t you supposed to ask me questions?”

She narrowed her eyes at him. “How are you?”

“How do you think I am?” he asked, not even bothering to mask his anger with sarcasm.

She leaned forward, clasping her hands on top of the clipboard. “Not well, Mr. Harris.”

For some reason, hearing her say his name—his regular name, not Megawatt, his alter ego—sent him over the edge. He launched himself at the barrier and slammed his palms against it. From past experience, he’d learned that open palms made much more noise than fists.

“What the hell do you expect?” he shouted.

To her credit, Dr. Wheeling didn’t flinch beyond a raised eyebrow. She made a note on her clipboard and said, “I expect you’ll want to have a seat now.”

His chair had fallen over. When Marcus reached to pick it up, he noticed the tiny arcs of electricity on his fingertips. Jaw clenched, he silently willed the charge to remain—a pointless effort, since it always faded no matter what he did. They made sure of that in this place.

He slumped in the chair—he wasn’t particularly interested in making a good impression with correct posture—and stared at Dr. Wheeling. All he wanted at the moment was for her to go away—odd, since the solitude of his cell was often unbearable.

“I don’t really feel like talking right now,” he mumbled.

“That’s fine. I can come back later.”

After she got up and walked toward the door, he said, “I still won’t feel like talking then.”

Without turning around, she replied, “Everyone feels like talking eventually, Mr. Harris. I’ve got time.”

(Psst. I have an e-mail newsletter. You should totally sign up for it. I might surprise you with stuff you don’t get to see here—like the rest of this story—or anywhere, for that matter.)