Some days, I feel more than a little guilty if I’m not spending every spare minute possible working on my book. Which is not to say that I do spend every spare minute working on it, just that whenever I do something other than write (which is often), I feel as if I’m somehow betraying something. That I’m not really a writer. That I don’t want it badly enough. That the idea isn’t compelling enough to try to get out on paper.

But then I look at what I’m working on, and it looks like this: 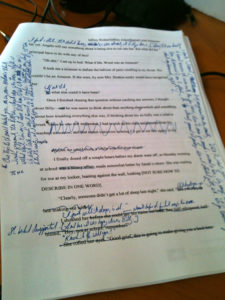 There’s the version that lives on the computer, and the sections of it that I print out twenty pages or so at a time. I cross out large chunks of it and write in between the lines what I think belongs there instead. When I run out of space, I write on the back of the sheet (unless I’ve printed it double sided) or move over to my notebook, where I make a note of what page of the manuscript I was on before I made the switch. Once I get through a twenty-page chunk of manuscript, I start typing it all up again and move on to the next section.

In the meantime, the edits to those twenty pages exist in a sort of limbo where they’re not saved and backed up anywhere except on paper. Whenever I leave the house with them in my bag, I think, if I got mugged, would I ask for the notebook? Probably. If the office were on fire or there were an active shooter, would I grab the bag with the pages before running out? Likely. There was a guy in the news recently because he ran back into a burning home to rescue his computer, which had the only copy of his novel on it. No cloud storage, no backup disc; is he crazy? I thought at the time. Now I’ve got these twenty pages at any one time that I would risk going back for.

So maybe I do want it bad enough.