I know, I know. It’s Saturday, not Friday. Sue me.

A pre-PS plug: My friend ‘Nathan’s YA novel, Exit Plans for Teenage Freaks, is available for preorder, but lucky me, I’m reading it right now and I think you should totally get it.

Done? Right. Moving on. The photo below is the prompt for last week’s Friday Flash Fic, but I can’t do anything on time. The photo for this week? I’ll probably write something in response to that one next week.

That’s me, perpetually a little behind.

Anyway, I looked at this one and thought, is he coming or going? Going, I decided. And someone doesn’t want him to go. That someone also happens to be a Star Trek fan, so if you get the references herein, I’m pleased.

It’s more than a bit sentimental, but yeah, sue me. (Don’t sue me.) Enjoy, and live long and prosper. 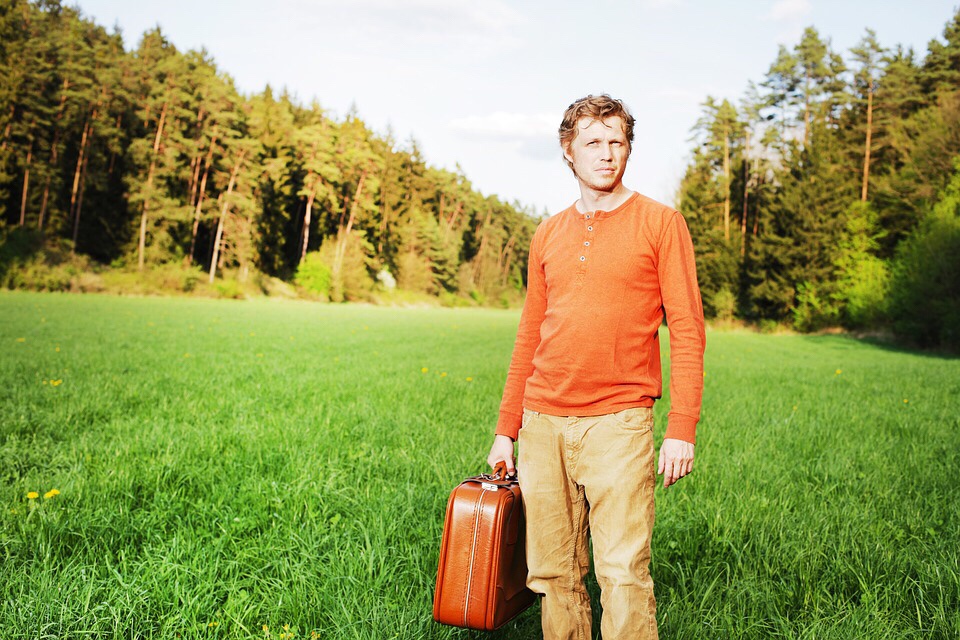 Peter set down his suitcase and waited for his ride. It was just before sunset, and the meadow was bathed in a golden-hour glow, that special quality of air that seemed purpose built to make beautiful things even more beautiful. And the meadow was beautiful: lush grass dotted with bobbleheaded yellow flowers swaying gently, and ringed with towering conifers. Peaceful. Quiet, except for the occasional birdsong from the trees, the swishing of breeze over blades of grass.

He was going to miss Earth so much.

“Peter?” The voice, from a distance, made him turn, even though he didn’t need to look in order to know who it was. A figure emerged from the trees and started across the meadow, open jacket flailing as he ran.

Leaving an assignment after three years was never easy. This, though—this was going to be hard.

“Hello, friend,” Peter said, once the reason he would miss Earth so much came to a stop in front of him.

It took Brett a moment to catch his breath. He leaned over, palms braced against his legs, and sweat sheened his forehead. When he was able to talk, he said, “What the hell are you doing here?”

As much as he knew Brett hated when people answered a question with a question, Peter said, “How did you manage to find me?”

Brett held up his phone to Peter, screen first. “You never turned off your Find My Phone.”

“Oh.” That had been a mistake, that one time he’d gotten hopelessly lost trying to find Brett at Forest Park. Inside, Peter berated himself: stupid, stupid, stupid. Of all the things to forget about this planet’s laughably primitive technology, something that simple escaped him? His monitor would never let him live it down.

A look crossed Brett’s face, and it made a hole open up in Peter, followed by an ache that he didn’t think he’d ever be able to knead away.

Brett’s face pulled down at the corners. His glance darted to the suitcase, back to Peter’s face, then at the meadow around them.

“What’s going on? Where are you going?”

“Home. So you came to the middle of nowhere?”

Oh, my friend, you have no idea. “There isn’t really time to explain.”

Peter took a deep breath. He had done his best to keep an arm’s length between Brett and himself this whole time, but the urge to bridge that gap had always been there and they both knew it. And now…

He’d never gotten as close to anyone on an embed before as he’d gotten to Brett. He could see why his monitor had warned him against it. And yet…

“You know how I told you I wasn’t from around here?”

“Well, I’m really not from anywhere nearby. But my assignment’s over now. It’s time for me to move on.”

Brett shook his head. “But that doesn’t explain why you’re leaving without even saying goodbye.”

Because I knew it would hurt this bad. “It was too difficult—“

“And what, this is easier?”

They both fell silent. Peter struggled to come up with an adequate answer to the question Brett wasn’t asking: Why are you hurting me like this?

“Are you sure it isn’t time for another colorful metaphor?” Peter asked.

Brett laughed, but it caught in his throat. “Double dumb ass on me,” he said, before he started crying.

“Oh, my friend,” Peter said, pulling Brett close as his tears turned into a full-on sob. “If I could stay for anyone, it would be for you.”

Brett lifted his head from Peter’s shoulder and looked him in the eye.

“Then don’t go, you idiot,” Brett said, and kissed him.

And for a moment, right between being startled that one of them finally closed the gap and returning the kiss in earnest, Peter thought, Maybe I could stay.

Until a stiff wind whipped at the back of his head and a shadow passed between them and the setting sun.

Brett broke off the kiss, eyes suddenly wide and his jaw slack as he stared skyward over Peter’s shoulder.

“What the hell is that?”

Peter turned. The black wedge of a stealth probe slid toward them overhead, the air rippling around the edge of its hull.

For a long moment, Peter watched as Brett’s gaze flicked between him and the ship hovering silently overhead. Whatever was going through his head, he didn’t say.

Peter’s phone rang. He slid it from his pocket and answered it.

“Nero e choi?” the voice on the other end asked.

The ship dropped the call at the same time as a transmat beam blinked on, spotlighting Peter. He stepped away from Brett.

“When you said you weren’t from around here, you really meant it,” Brett said.

“I wish we had more time. I’d explain everything.” And he would, too. Regulations be damned.

Peter shook his head. The beam brightened and he felt the familiar tingle he hadn’t felt in three years. He picked up his bag. “I have to. I’m sorry.”

And then Brett ran. Right into him. He threw his arms around Peter’s neck and nearly knocked the both of them over.

Brett looked him in the eye as the meadow around them vanished, and the opaque glass of the transmat chamber faded in.